True or False – You can catch poison ivy from someone else’s rash? 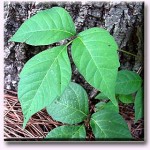 Many people avoid spending time outdoors in the summer for fear of coming in contact with poison ivy.  I consider myself to be pretty lucky in that I’ve never had severe reactions to poison ivy.  I do spend many hours outdoors hiking, cutting wood, mountain biking, and walking to secret fishing holes.  I don’t remember ever getting poison ivy as a child, but every so often as an adult I’ll get a slight rash after exposure.  Even though my reactions tend to be what I would categorize as minor, the small spots that appear can be intensely itchy and can blister up after a few days.  Poison ivy reactions occur after coming in contact with urushiol oil on the leaves, stem, or roots of the poison ivy plant.  Since the oil is found in the stem and roots, it is possible to get a rash from poison ivy even during colder months of the year.  It is also recommended not to burn poison ivy plants as breathing or coming in contact with the smoke can lead to a reaction.  The rash that occurs after exposure can get very red, irritated, and blister up.  The blisters often break and leak fluid.  This is not a pretty sight and I can see how some might think they could spread or catch poison ivy from these rashes.  However, that is not the case.  In an article written in Dermatology Nursing, Patricia Jackson Allen writes “The rash may grow in size and development of new vesicles can occur during the first 2 weeks without additional contact with urushiol due to the allergenic response of the host.  This leads to the common believe that the serum from vesicles is allergenic.  The serum released from the vesicles is not antigenic and does not spread the allergic contact reaction.”  It is probably good practice to avoid other people’s poison ivy rashes and the fluid oozing out of them.  But in the unlikely event that should occur, you can feel confident that you won’t soon be developing a rash of your own.