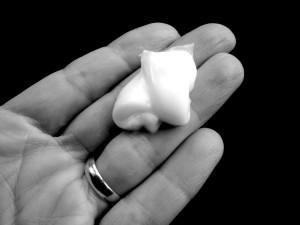 Stretch marks (the medical name is striae gravidarum) are those linear scar-looking lines that appear on the skin. They commonly appear on the stomach and breasts but can also appear on the legs and buttocks. They are frequently a dark purple in color and are a source of embarrassment for many. Stretch marks sometimes appear following pregnancy, after large gains in muscle mass in weight lifters and body builders, or other significant weight gains in a relatively short time period. I experienced stretch marks my freshman year in college when I gained fifty pounds after just nine months (unlimited meal plan in the cafeteria). My wife also developed stretch marks following the birth of our first child. Interestingly, both of us were informed by healthcare providers that using cocoa butter would help eliminate stretch marks and would help prevent more stretch marks from occurring in the future. We both tried cocoa butter but didn’t notice any change in the appearance of the marks. After performing a quick internet search I came across many sites that promote the use of cocoa butter for stretch marks, but the claims of what cocoa butter could do were never backed up by scientific evidence. I was able to find one study (Osman, et al. 2008) where researchers randomly assigned pregnant women to a group that received lotion containing cocoa butter and another group of pregnant women to a group that received a placebo lotion that did not contain cocoa butter. The women entered the study during the first trimester of pregnancy and were instructed to apply the lotion until delivery. Following the study there was no difference in the development of stretch marks in the women who used cocoa butter lotion and those who didn’t.  The authors concluded that their findings did not support the use of cocoa butter lotion to prevent stretch marks.