True or False: Females are genetically predisposed to bulking up if they start lifting weights? 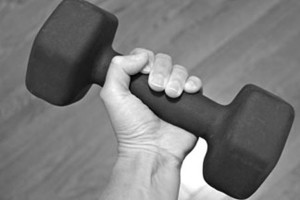 While strolling through the magazine isle at her local super- market, Amanda happened to glance at the cover of a female bodybuilding magazine. She stared in near disbelief at the size of the woman on the cover. Her muscles were huge! Her veins were bulging! She looked more like a man than a woman.

Earlier that week, Amanda had found an article touting the benefits of resistance training. She had read that lifting weights can help decrease body fat, strengthen muscle and bone, help prevent injuries and have a positive impact on balance. She was actually considering a visit to her local fitness center to talk about getting a membership, but not now—not after seeing the cover of that magazine!

Regretfully, many women believe that if they start lifting weights, their thighs, biceps and shoulders will almost immediately be transformed into giant slabs of bulking muscle. In reality, it is difficult to gain significant muscle mass from lifting weights, a truth for both men and women. However, it is particularly difficult for women to gain muscle mass, as they have much less testosterone than do  men.

Think about it: You likely have friends and family members who participate in resistance-training exercises. They lift weights on their own, and they attend strength-training classes, often with friends. Maybe you even know someone who attends those dreaded 5 a.m. boot-camp classes, where participants are forced to do thousands of squats, lunges and pushups to the point of exhaustion!

Few of these individuals have muscles that resemble those of the people you see on bodybuilding magazine covers. When you see pictures of women with huge muscles, you can almost bet that performance-enhancing drugs are involved.

It is true that women who engage in resistance training activities usually get stronger; those gains in strength are often similar to gains realized by men, as long as the training programs are similar. In their book Physiology of Sport and Exercise, authors Wilmore and Costill (2004) report on research showing that women can gain considerable benefit from strength-training programs, even though strength gains are usually not accompanied by large increases in muscle bulk. They also write that hypertrophy (increase in muscle size) is neither a necessary consequence of nor a prerequisite to gains in muscle strength.

I’ve worked in the fitness arena for nearly 20 years and can think of dozens of women I’ve known who started lifting weights—even heavy weights— and in a matter of 4–6 weeks looked more lean, symmetrical and feminine because of their efforts. I can’t think of a single example of a woman who bulked up because of lifting.

I believe that both men and women would derive greater benefit from resistance training exercises if they would crank up the intensity just a bit. Rest assured, you can put aside your fear that starting a lifting program will someday land you on the cover of that bodybuilding  magazine.

True or False: Resistance training can help you lose weight? 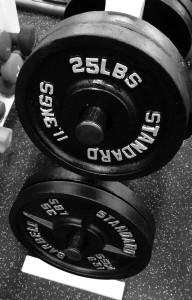 Let’s tackle the question of whether engaging in resistance training can help you lose weight.

The truth is that performing resistance-training exercises can indeed help you lose weight. There are a number of reasons why this is the case.

Lifting weights burns calories. The number of calories burned while doing biceps curls, push-ups, squats or resistance-band exercises depends on a number of factors, including the intensity of the lifting session and how many sets and repetitions are performed. On average, we burn from 200– 500 calories an hour lifting weights. If you are lifting 3–4 times a week, those calories can really add up.

Our metabolism elevates slightly when we lift weights. Following our lifting session, our metabolism doesn’t immediately drop to what its baseline level was prior to hitting the gym; it can stay elevated for minutes or even hours afterward.

This phenomenon known as EPOC—excess post-exercise oxygen consumption—results in a slightly increased rate of oxygen update after exercise as the body works to restore hormonal balance and replenish fuel stores. You burn additional calories during this recovery process. The more intense the workout, the longer your metabolism will stay elevated and the more calories you will burn.

Researchers Kirk & Colleagues (2009) examined whether resistance training had an impact on energy expenditure and fat oxidation in men and women. They studied overweight young adults and had them lift weights three days a week for six months, performing one set of nine exercises with 3–6 repetitions. Following the study, the authors concluded that their findings “suggest that a minimal resistance training program may provide a sufficient stimulus to impact daily energy balance and to prevent long-term weight or body fat gain in sedentary, overweight young adults.”

Muscle is metabolically active tissue; each pound of muscle we have burns about 20 calories a day at rest. Considering that after age 30 we lose from 5–10% of our muscle mass per decade, you can see how maintaining the muscle mass we have—or adding to it a bit by resistance training—could help with weight maintenance over our  lifetime.