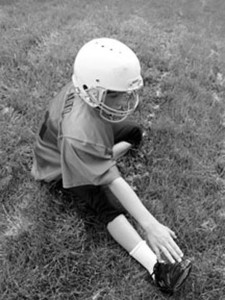 Oh, the good old pre-game static stretching routine. Most of us have done it thousands of times over the years, but why exactly were we doing it, and what exactly was it supposed to  accomplish?

Static stretching is where you get your muscles in a position of stretch and hold them there for 30–60 seconds. One common static stretch is standing with one leg in front of the other, keeping your legs straight, and then bending forward to try to touch the ground. Go on—give it a try. If it’s been a few years since you have done this, it’s not likely that your fingers will make contact with the ground. But if you can get them as far down as your ankles, you’re doing pretty well!

Static stretching started to gain popularity in the late 1800s and became highly popular in the mid-1900s. Most coaches believed—and many still do—that static stretching prior to activity would both improve performance and decrease injuries. It turns out that neither of these is true.

Current research shows that static stretching prior to explosive-type movements such as sprinting or jumping actually decreases performance. (See chapter 8 in my first book for more information on this.)

And most research conducted on stretching to prevent injury shows little correlation between stretching prior to activities and reduced injury rates.

Small and colleagues (2008), in an article titled “A systematic review into  the efficacy of static stretching as part of a warm-up for the prevention of exercise-related injury,” state, “Results seem to indicate that there is moderate-to-strong evidence that routine application of static stretching will not reduce overall injury.” Research conducted on military personnel has shown the same results; stretching prior to physical training doesn’t reduce injury rates in soldiers.

So if the practice of performing static stretching prior to being active doesn’t improve performance or decrease injury rates, why do we do it? I think the reason is simple: That’s how it’s always been done. Many coaches— especially those who work with younger athletes—don’t stay current on the latest research in the area of exercise and sport science. They fall back to what they were taught or told to do when they were athletes. For some coaches, this could have been 20, 30, or even 40 years ago. My wife and I have three boys in sports year-round, and we have seen some interesting pre-practice and pre-game routines! I’m sure many of you have as well.

I want to be clear: It’s not that static stretching is bad, but many fitness professionals now suggest saving static stretching until after your practice or game. Before physical activity, you’re better off to engage in some light cardiovascular exercise to get your blood flowing and your body temperature elevated slightly.

You also might try some active or dynamic stretches or warm-up activities to ready your body for activity. I’d much rather go for a light jog than bend forward and try to touch my toes again!

Small, K., McNaughton, M., and Matthews, M. A systematic review into the efficacy of static stretching as part of a warm-up for the prevention of exercise-related injury. Research in Sports Medicine (2008), Vol 16, pp. 213-231.