True or False: Storing coffee in the freezer makes it last longer?

COFFEE IS ONE of the most-consumed beverages on the planet. According to the website Statistic Brain, 54% of Americans over age 18 drink coffee every day, which translates to roughly 100 million coffee drinkers in the United States.

We also import about $4 billion worth of coffee annually, with the average coffee drinker spending about $165 every year on the black elixir.

Most coffee experts (how I would love to be one of them!) consider heat, light, air and moisture coffee’s enemies because these elements cause coffee to lose flavor. That’s why some people think storing coffee in the freezer is a good idea.

First, coffee is porous; it can absorb other flavors. How do you think a gourmet coffee such as hazelnut gets its special aroma and taste? No, not from hazelnut coffee beans. If you store things like fish, liver and other smelly foods in the freezer as I do, those other aromatic foodstuffs just might influence the flavor of your coffee.

Second, it’s possible that freezing breaks down the oils that give coffee its flavor. If that’s the case, it makes sense to store your coffee at room temperature.

Third, remember how moisture is one of coffee’s greatest enemies? If you are constantly removing coffee from the freezer to brew it, it might be possible for small amounts of moisture (think of fluctuating temperatures and condensation) to negatively affect your coffee’s flavor.

According to the National Coffee Association, established in 1911, we shouldn’t refrigerate or freeze coffee, because contact with moisture will cause it to deteriorate. It is better stored in an airtight glass or ceramic container in a cool, dark location.

That got me thinking: If storing coffee in the refrigerator or freezer were a good idea, don’t you think that’s where you would find it in the grocery store?

I found a lot of interesting information on the National Coffee Association website. For example, coffee plants can range from small shrubs to tall trees, some reaching 30 feet in height if not pruned. The leaves of coffee plants are generally green, but they also can also be yellow or purple. And there are somewhere between 25 and 100 different types of coffee plants.

Legend has it that coffee was discovered centuries ago when a goat herder observed one of his goats eating coffee berries. The goat apparently started acting a little wired and had trouble getting to sleep that night. The same thing happens to me when I drink coffee after 6 p.m.

My wife and I are generally not fussy people, and we are by no means coffee connoisseurs. We don’t pay attention to how long our coffee sits in our cupboard, and we don’t even mind heating up perked coffee that is a day or two old.

Joining about 65% of other coffee drinkers, I add creamer to my coffee. I usually don’t measure how much creamer I put in, but my coffee ends up being an attractive light-brown color—the same color we decided to paint the walls of our kitchen, dining room, bathroom and family room.

Most experts recommend using coffee within two weeks of grinding or opening a package. If you are really serious about the flavor of your coffee, you probably should grind your beans right before you brew it.

If you keep your coffee in the freezer as my wife and I used to because you think it lasts longer, you can stop. Find a convenient dry, cool, dark place to store your coffee in an airtight container. 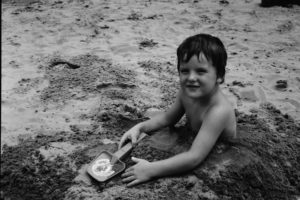