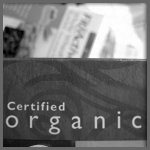 A few hours before I wrote this section of the book I was in our family’s garden picking raspberries with my 11 year old son.  We ended up picking almost two pints worth and probably ate a pint between us as we worked.  Following the raspberry harvest we drifted over to the peas and simply smiled at each other as we crunched away, consuming pod and all.  Growing healthy food is a topic I am very interested in and rarely if ever do we use chemicals in our garden.  I guess I would consider myself an organic gardener.  The organic food industry is one that is grown tremendously over the past 5 to 10 years and probably will approach the 50 billion dollar mark this year.  Organic farms have traditionally been small scale operations, however, as the interest in organic increases, so does the size of the farms.  Generally speaking, organically grown foods are grown without using things like pesticides and herbicides (for plant products) or hormones (for animal products) and some say that organic growing processes have less of a negative impact on the environment.

Many people believe that organically grown food is nutritionally superior to conventionally grown food, but research really doesn’t support that.  Dangour and colleagues (2009) published a review article in which they identified 162 articles on organic farming.  They then determined that 55 were of satisfactory quality to include in their review.  These authors stated that “One broad conclusion to draw from this review is that there is no evidence to support the selection of organically produced foodstuffs over conventionally produced foodstuffs to increase the intake of specific nutrients or nutritionally relevant substances.”  There may be many good reasons to grow or purchase organic food; however, to do so because of the belief that they contain more nutrients doesn’t appear to be one of them.