True or False – Having a slow metabolism is a major cause of obesity? 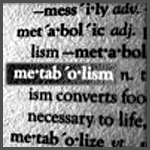 As an individual who has worked in the area of health and wellness for many years, I’ve frequently heard people grumble about how  thin people can eat lots of food and not gain weight, and how others (usually themselves) simply need to look at something like a piece of chocolate cake and they start to gain weight and inches.  Many times overweight or obese individuals blame their weight status on their “slow metabolism”.  However, research doesn’t support the idea that being overweight or obese is the result of a slow metabolism.  Dr. Donald Hensrud on MayoClinic.com states, “Yes, there is such a thing as a slow metabolism.  But it’s rare and it’s usually not what’s behind being overweight or obese – that’s usually a matter of diet and exercise.”  In addition, Dr. Hensrud says things like genetics, family history, certain medications, lack of sleep, and unhealthy habits like skipping breakfast are more likely contributors to weight gain.  Your metabolism (sometimes referred to as resting metabolic rate or basal metabolic rate) refers to the number of calories you burn just to keep your body working or functioning properly.  Bodily functions such as your heart beating, breathing, digestion, and muscle contractions all require energy (calories).  Research has also shown that overweight or obese individuals usually have a higher absolute metabolic rate as compared to thin or lean individuals, simply because heavier individuals have a greater amount of body mass.  When body size is taken into account, metabolic rates of obese and non-obese individuals is usually very similar.  In an article entitled Energy metabolism and obesity published in the Medical Clinics of North America, Dr. Michael Goran states “Some longitudinal studies support the idea that reduced energy expenditure is a risk factor for the development of obesity, but most do not.”