True or False – Ulcers are caused by stress 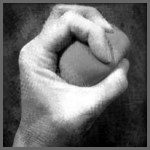 Many of us have a stereotype in our minds of the classic ulcer sufferer.  We can picture them- overworked in a high-pressure job, overstressed both at work and at home as well.  Incessantly worried, they are bombarded at every side from kids, bosses, clients- the world.  They eat antacids like candy and look permanently perplexed as their troubles seem to multiply.  If they could just relax and unwind, de-clutter and de-stress their lives, maybe take a stress management course, then the pain in their abdomens would subside, right?  As it turns out, that may not be right.  In the not-so-distant past, this was the advice given ulcer patients by their physicians.  Medical knowledge up until about the early 1980’s suggested that a decrease in blood flow to the stomach during times of anxiety weakened the stomach wall, making it vulnerable to harsh stomach acids.  While stress is still thought to create an environment that is conducive to ulcers, it is no longer considered to be the primary culprit.

In the early 1980’s Dr. Robin Warren, a researcher, made a startling discovery.   While conducting biopsies of ulcer patients, he found a bacterium which was later named Helicobacter pylori.  Warren and his colleague, Dr. Barry Marshall believed that this bacterium, rather than stress, was responsible for the ulcers.  Because their claim was such a divergence from conventional belief, it was met with much resistance and skepticism.  Unable to convince his peers, Dr. Marshall set out to prove the theory in a radical way.  He actually drank the H. Pylori bacteria.   Days afterward, he became pale and lethargic and had, indeed, developed an ulcer.  Ulcer research thereafter was focused on these bacteria.  According to his article in the Journal of Gastroenterology, James Freston (2000) reports that “Helicobacter pylori infection is recognized throughout the world as the most common cause of both duodenal and gastric ulcers.”