True or False: Gelatin is made by boiling the bones, skins, and hides of cows and pigs? 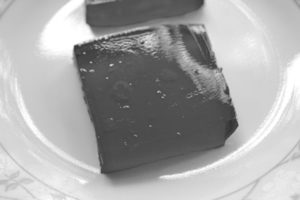 Gelatin simply is processed protein. It is similar to the structural protein collagen, a tough, fibrous protein found in connective tissue such as ligaments and tendons as well as in skin, bone and cartilage in humans and many animals. Collagen gives these structures strength and in some cases, elasticity, helping them stretch without tearing or ripping.

As hard as it may be to believe, commercial gelatin truly is made by boiling the bones, skins and hides of cows and pigs. Here’s how the Columbia Electronic Encyclopedia describes gelatin:

“Gelatin or animal jelly, foodstuff obtained from connective tissue (found in hoofs, bones, tendons, ligaments and cartilage) of vertebrate animals by the action of boiling water or dilute acid. It is largely composed of denatured collagen, a protein particularly rich in the amino acids proline and hydroxyproline. The process of manufacture is a complex one that involves removing foreign substances, boiling the material (usually in distilled water in alu- minum vessels to prevent contamination), and purifying it of all chemicals used in freeing the gelatin from the connective tissues. The final product in its purest form is brittle, transparent, colorless, tasteless, and odorless and has the distinguishing property of dissolving in hot water and congealing when cold.”

“Congealing” means to make thick or solidify, which is what happens when you make JELL-O. Most of us, either when we were children or as adults with our own children, have made JELL-O. The process is quite simple: Mix the JELL-O powder in a bowl with a cup of boiling water, add a cup of cold water, stir, and place in the fridge and wait. The waiting is the hard part for kids! JELL-O JIGGLERS® (you use only one cup of water and cut the chilled, firm JELL-O into shapes) are a huge hit with our three kids.

Making JELL-O or other gelatin brands is the most common use of gelatin. JELL-O was patented in 1845 by Peter Cooper, and I read recently that Kraft Foods sells over a million boxes of JELL-O a day! There is even a museum in Le Roy, N.Y., dedicated to JELL-O.

The first four JELL-O flavors were orange, lemon, strawberry and raspberry. There have been 36 flavors of JELL-O sold over the years; some of the flavors that didn’t last include apple, chocolate and coffee.

Gelatin is also used in cosmetics, shampoos, candy, photographic film and the coating on vitamins.

The process by which gelatin is made (boiling animal parts) may sound a bit disgusting to some, and it may on the surface appear to be unclean and not very safe. However, the steps are strictly regulated. The heating, treating and filtering process makes gelatin safe for consumption.

As you can imagine, many vegans avoid gelatin products because it originates from animal parts. If this is a concern for you and you’d like to be able to eat gelatin, there is a vegan version called agar that is derived from seaweed. Agar is also a good setting agent—we talked about gelatin’s congealing characteristic earlier in this chapter—and is commonly used throughout Asia in desserts. And some gelatin producers are starting to use more fish products to make gelatin.

I have to admit that prior to researching and writing this chapter, I had heard that gelatin was made from boiling the bones, skins and hides of animals, but I wasn’t certain it was true. Now that I know it is, I will think a bit differently about products with gelatin in them—but likely will still enjoy an occasional JELL-O JIGGLERS® with my kids.

True or False: Exercise after eating a meal causes food to be digested faster and fewer calories to be absorbed? 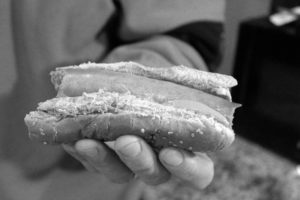 If you do a quick Internet search on this topic, it won’t take long to find recommendations to go for a walk after eating a meal. The rationale? The movement associated with walking will speed digestion and maybe even result in absorbing fewer calories.

One interesting statement I found on a website that advocates walking after eating suggests, “Getting a jump on digestion [by walking after a meal] will help continue that process through the night, burning more calories and shedding pounds faster.” This simply isn’t true.

Walking is a highly recommended form of physical activity because of its many health benefits. Walking can help us control our weight, increase our energy levels and good cholesterol, and decrease our risk for hypertension, cardiovascular disease, diabetes and stroke.

Walking has also been shown to help reduce our reliance on medications and improve our sex life. Walking is good! However, walking after eating a meal doesn’t speed up digestion, nor does it reduce the absorption of calories. This is a topic about which there appears to be a fair amount of disagreement in published literature. As stated by the author of one of the articles I reviewed, the impact of exercise on the time it takes food to pass through the gastrointestinal tract “is a matter of hard debate.”

Some research suggests that light aerobic exercise prolongs mouth-to-cecum (first part of the large intestine) transit time; some studies suggest that gastric emptying (time it takes for food to leave the stomach) doesn’t change with exercise; and some research suggests that transit time is accelerated with activity. The components and quantity of the meal and the type and intensity of the activity certainly could be factors as well.

Robertson and colleagues (1993) published a study in the Journal of Clinical Gastroenterology that examined the effects of exercise on total and segmental colon transit. Their results showed that with exercise, total gastrointestinal transit time decreased in five subjects, increased in six subjects, and did not change in five subjects. They concluded, “These observations support our previous findings that physical activity to the extent that average people consider routine exercise does not necessarily improve gastrointestinal transit.”

There isn’t anything wrong with walking after eating; my wife and I often walk after dinner, and that certainly is healthier than sitting and watching television, which many people do after the evening meal. However, we don’t walk in the evenings because we think it will help digest our food or result in fewer calories being absorbed; we simply walk because we enjoy it!

Some people can experience gastrointestinal distress if they walk right after eating, so you may want to wait 20 or 30 minutes before sliding into your walking shoes and hitting the streets or the nearest walking trail.