True or False – You should usually let fevers run their course without giving medications? 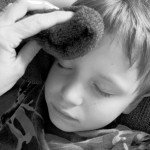 A fever is when our core body temperature is higher than it is supposed to be.  Normally, our body temperature hovers around 98.6 degrees F, but it is common for that number to fluctuate a degree or so during the day.  Usually, our temperature is at its lowest point sometime in the early morning and at its highest point sometime in the late afternoon.  Our temperature will also rise during periods of increased physical activity.  Many consider the temperature of 100.5 degrees F to be the point where we officially have a fever.  As parents of three children I can tell you that the first time one of our kids had a fever my wife and I experienced panic.  What is wrong?  What if the fever keeps going up?  When should we go to the doctor?  What can we do to lower the fever?  How long before brain cells start dying?  What we experienced is common and is sometimes referred to as fever phobia.  Generally speaking, fever phobia is the fear that something bad is happening when someone (e.g., your child) has a fever.
As parents, our first desire with a sick child is usually to treat and take care of our children.  When a fever is involved, many think that means doing something to lower the fever.  However, experts say that is not what we should usually do.  It turns out that a fever is part of our body’s natural immune system defense against invading microorganisms.  Glatstein & Scolnik (2008) published an article titled Fever: to treat or not to treat in the World Journal of Pediatrics.  The authors state that “In humans, increased temperature is associated with decreased microbial reproduction and increased inflammatory response”.  Both help us fight invading viruses and bacteria.  The authors also state that “Since fever is not in itself harmful, and might even be protective, there is no particular reason to treat it other than as a comfort measure”.
Reference:
Glatstein M & Scolnik D: Fever: to treat or not to treat.  World Journal of Pediatrics (2008), Vol 4, pps. 245-247.