True or False – There is a link between eating out of plastic containers that contain BPA and getting cancer? 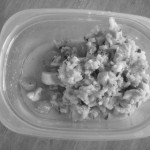 I don’t believe in spending tremendous amounts of money on fancy Tupperware containers.  If you were to look inside my refrigerator, you would likely see leftovers placed in old plastic margarine, cottage cheese, cool whip, and yogurt containers.  Many times when I’m in a hurry and want a quick snack, I’ll take out one of these containers with leftovers in it and be tempted to toss it in the microwave for 30 or 45 seconds.  I actually did that a couple years ago and in less than a minute the container I was using turned into a twisted, melted mess.  Much of the health concern revolving around microwaving in plastic containers is related to Bisphenol A (BPA), a chemical used when plastics are made.  BPA is known as an endocrine disruptor, which means that it interferes with the creation and use of hormones in the body.
Most of us have enough problems; we don’t need another thing messing with our hormones!  Over the past few years there has been greater concern about eating and drinking out of containers that contain BPA.  Some products are now starting to share information like “BPA free” on their label and recently Canada classified BPA as toxic.  Studies have shown that various components of plastic containers can leach out into food when they are heated.  However, many of these studies have shown that the amount is small and usually falls within acceptable standards.  But, more current research is starting to paint a slightly different picture.  In a recent article published in the American Journal of Public Health (2009) Sarah Vogel states “New research on very-low-dose exposure to BPA suggests an association with adverse health effects, including breast and prostate cancer, obesity, neurobehavioral problems, and reproductive abnormalities.  These findings challenge the long-standing scientific and legal presumption of BPA’s safety”.
Reference:
Vogel S: The politics of plastics: The making and unmaking of bisphenol A “safety”. American Journal of Public Health (2009), Vol 99, pps. S559-S566.