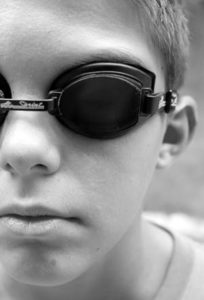 I LOVE TALKING to people about swimming! Over the past 20 years I’ve had hundreds—maybe even thousands—of conversations with people about swimming. Most agree that swimming is a great form of physical activity and beneficial for good health … and most are quick to let you know that they’ve tried swimming and it’s not for them. Are you one of these people?

The conversation usually goes something like this: “Oh yeah, I tried swimming for exercise a few years ago. Wow, was it ever hard! I just couldn’t get the breathing down, and after a lap or two I would get a panicky feeling and would have to stop. I was also confused about how to perform the strokes properly—and the little dive-under-the-water, twist, and kick-off-the-wall move at the end of each lap—forget about it!”

I would then ask how many times they mustered the courage to get in the pool and swim before deciding to give up on it, and the response was usually, “Oh, three or four times.”

I have been a recreational swimmer my whole life, but I didn’t swim an actual lap in a pool until I was in my late 30s. My parents never signed me up for swim lessons when I was young, and I learned to swim the old-fashioned way: Someone tossed me into a lake in water over my head, and I struggled to stay afloat, eventually learning how to swim. I started swimming pool laps when I got interested in triathlons, and I’ve done three or four in the past few years.

I struggled mightily the first few times in the water. I was able to complete a lap or two, but then I’d have to stop due to fatigue and exhaustion as well as a panicky feeling of not being able to catch my breath.

But I stuck with it and came up with a plan: Every time I entered the pool, I would attempt to swim one more lap. It worked! After about three or four months and a constant battle against a little voice in my head to quit, I was able to swim a mile without stopping.

I’ve certainly read a lot about the benefits of swimming, and I have to admit that I’m a true convert. Swimming can help you improve your cardiovascular endurance, yet it is low impact; injuries to the ankle, knee, hip and back are usually not as frequent in swimmers when compared with runners or those who play racquetball and similar sports.

There is also something very soothing, relaxing and almost spiritual about being in the water. Even after a fairly long, tough swim, people report feeling refreshed and reinvigorated.

With all the benefits that come with swimming, I have to say I was a bit surprised when I first learned of research that had been published comparing mortality (death rates) in swimmers versus runners, walkers and individuals who didn’t exercise (this research was done on men). The authors (Chase et al., 2008) reported that over a 13-year period 1,336 of 20,356 runners died, 1,747 of 15,883 sedentary individuals died, 292 of 3,746 walkers died and 11 of 562 swimmers died.

So swimmers had 53%, 50%, and 49% lower all-cause mortality risk than did men who were sedentary, walkers or runners, respectively. The authors didn’t provide much information about why swimmers seem to experience lower mortality rates, but the low-impact therapeutic nature of swimming certainly might contribute to it.

I obviously am a big fan of swimming. But if you like to run, cycle, walk, play basketball or engage in similar sports, I encourage you to continue. If you have never tried swimming—or tried it at some point and stopped—I encourage you to get some pointers on how to swim, and then get in the water and make swimming a regular part of your physical activity  routine.