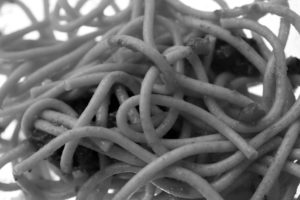 Glycogen is carbohydrates (energy) stored primarily in the liver and mus- cles. When we exercise, we draw on glycogen for fuel. When we engage in long endurance events—a marathon, triathlon or 100-mile cycling race, for example—our glycogen stores become very important. Without energy to keep our bodies going during these long-distance challenges, fatigue sets in faster, and our overall performance is greatly diminished.

The first protocol used for carbohydrate loading, often referred to as the classic approach, had athletes drastically cutting back on carbs 5–6 days before an event and doing lots of intense exercise. They took in an abundance of carbs 2–3 days before the event, at the same time reducing their activity level.

The goal was to deplete glycogen stores, both by cutting back on carbs and doing the intense exercise, so that when they upped their carbohydrate intake, cells in the body would be much more receptive or sensitive to carbohydrates and to storing them for future use.

This classic approach worked, but it wasn’t popular with athletes. If you have ever tried to perform intense exercise on a low-carbohydrate diet, you know why. Subsequent studies have shown that you don’t need to go through the glycogen-depleting process in order to improve performance with carbohydrate loading.

Now the general protocol for carbohydrate loading is to increase carbohydrate intake 2–3 days prior to an event and to combine that with tapered or reduced activity.

Many studies on athletic performance have shown that carbohydrate loading improves performance by 2–3%. at might not sound like a lot to some people, but in a marathon, that could be the difference between win- ning and not even finishing in the top 10–20% of runners.

Sedlock (2008), in an article published in Current Sports Medicine Reports, stated that the ergogenic (performance-enhancing) value of carbohydrate loading and associated physiological mechanisms has likely been studied more than any other singular performance-enhancing strategy. She also states that the ergogenic benefit of carbohydrate loading for endurance performance is a widely accepted tenet.

So yes, carbohydrate loading does improve aerobic performance. For most of us who are considered general recreational athletes, we will probably never need to go through a carbohydrate-loading regimen. As I finish this chapter, my cute little dog Scout is looking at me with great anticipation to take him for a walk, which I am gladly going to do. Carbohydrate loading likely wouldn’t help me much during that 30-minute outing.

However, if you are planning on participating in an endurance activity that will last 90 minutes or longer, then carbohydrate loading could help delay fatigue and have a positive impact on your overall performance.