True or False: Grapefruit juice can impact many medications? 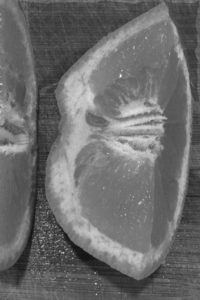 I WASN’T MUCH of a grapefruit fan growing up—that is, unless my mother cut the grapefruit in half, separated the pulpy and meaty portion of the fruit from the tough—and sometimes bitter—skin surrounding it, and covered the entire surface with sugar.

I find it interesting that my kids are the same way—and they weren’t even around when I was growing up! As an adult I now enjoy peeling a grapefruit and eating it slice-by-slice, the way most people eat oranges.

Grapefruit is healthy; it’s low in calories, it contains lots of vitamins and minerals, it’s a good source of fiber, and it contains antioxidants. Most of us can consider grapefruit a “safe” fruit.

Grapefruit juice doesn’t interact directly with medications; it inhibits an enzyme in your small intestine that works to break down certain medica- tions. Interfering with that enzyme can result in too much medication enter- ing your blood, potentially leading to a dangerous situation.

This phenomenon was accidentally discovered in the late 1980s. Researchers investigating the interaction of alcohol and the prescription drug felodipine used grapefruit juice to cover up the taste of the alcohol. However, one result of the study was a large increase of felodipine in the blood of research participants.

Grapefruit juice can also have the opposite effect, lowering the concentra- tion of a few medications in the blood.

There are dozens of medications that can be negatively affected by grape- fruit juice, including those for pain control, hypertension, allergies, high cholesterol, depression, epilepsy, heart disease and asthma.

In an article published in Nutrition Journal, authors Kiani and Imam (2007) state, “Grapefruit juice is consumed widely in today’s health-conscious world as a protector against cardiovascular disease and cancers. It  has, however, been found to be an inhibitor of the intestinal cytochrome P-450 3A4 system, which is responsible for the first-pass metabolism of many drugs.”

The authors also cautioned, “In light of the wide-ranging effects of grape- fruit juice on the pharmacokinetics of various drugs, physicians need to be aware of these interactions and should make an attempt to warn and educate their patients regarding potential consequences of concomitant ingestion of these two items.”

Other citrus fruits that may interact with medications  include  Seville oranges and tangelos. Lemons, limes and regular oranges generally are thought to have a low risk of interacting with  medications.

If you take prescription or over-the-counter medications, have a conversation with your doctor or pharmacist if you wish to eat grapefruit or drink grapefruit juice.