True or False – When eating celery, you burn more calories than you consume 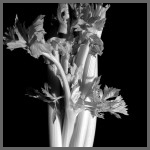 It is a common belief that eating certain foods results in your body burning more calories than are actually contained in the food itself.  These foods are referred to as negative calorie foods.  The belief revolves around the fact that when we eat food we do expend some energy breaking down and absorbing that food.  This is referred to as the thermal effect of a meal (TEM), the thermal effect of food (TEF), the thermal effect of eating (TEE), or diet induced thermogenesis (DIT). Celery is one of the foods that many claim to be a negative calorie food.  Other foods often listed as negative calorie foods include cucumbers, mushrooms, lettuce, onions, zucchini, etc.  When you think about it, most of these foods are basically water and fiber.  With the number of people who struggle with being overweight now days, this concept of eating negative calorie foods for weight loss purposes has gotten to be very popular.  In fact, I did an internet search using the terms “negative calorie foods” and quickly found lots of information on negative calorie diets.   I got really excited when I read more information on the negative calorie diet.  Apparently, when you follow this diet you can eat all the food you want!  While eating all the food you want, you will lose lots of weight.  Best of all, if you try this diet you will never be hungry again.  I’ll have to admit, I am a bit skeptical.  When I read material like that I often think back to my parents telling me the old adage “if it sounds too good to be true it probably is”.  I recently came across a book written by Registered Dietician Roberta Larson Duyff for the American Dietetic Association (1999).  The author does say that the notion of eating celery as a weight loss aid because you burn more calories than it contains is a myth, and if there is a weight loss benefit it is likely because you are eating the celery in place of higher calorie foods.