True or False – If you wait to drink until you are thirsty, you are already dehydrated 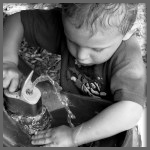 I usually get thirsty two or three times during a normal day.  If it is a weekend and I am at home working in the yard or the garden, or playing sports with my three children, I might actually experience thirst a half dozen or more times during the day.  Should I be afraid that I am chronically dehydrated and that my health is at risk?  Most experts are now saying no.  This notion of “If you wait to drink until you are thirsty you are already dehydrated” has been around for some time and is something that many people believe.  However, there really is very little scientific evidence to support the idea.  Heinz Valtin (2002) in an article published in The American Journal of Physiology – Regulatory, Integrative and Comparative Physiology states this notion or fear of being dehydrated if you experience thirst is a myth.  He writes that a rise in plasma osmolality (the proportion of materials like glucose and sodium in blood) of 2% can elicit thirst and that a plasma osmolality increase of roughly 5% is when someone would be considered dehydrated.

I spoke with one of my colleagues, Dr. Carl Foster about this.  Dr. Foster is a well respected exercise physiologist and a past president of the American College of Sports Medicine.  Dr. Foster stated that the idea of already being dehydrated if you got thirsty was a common belief 8 to 10 years ago, and that most experts today think it is perfectly acceptable to let thirst be your guide in regards to drinking fluids.  There certainly is nothing wrong with consuming fluids before you are thirsty, but it seems that our society has gotten to the point where the expected norm is to carry a water bottle everywhere you go and be sipping water every 10 or 15 minutes.  I’m sure the companies that are making millions keeping us all well hydrated will continue to be in support of that idea.